Solar photovoltaic (PV) could surge ahead of coal and gas and become the largest source of installed power capacity in the world in the next two decades if countries pursue stated policies and targets, the International Energy Agency (IEA) said in its newly released World Energy Outlook 2019 (WEO2019).

The agency’s annual publication, which it issued Nov. 13, suggests a major shift toward low-carbon sources is inevitable. If countries pursue existing and already announced policies (a WEO2019 scenario that was formerly known as the “New Policies Scenario,” and which the IEA renamed the “Stated Policies Scenario” in the new report), the share of renewable generation—not capacity—could nearly double, from 26% today to 44% to 2040, and it will surpass coal as early as 2026. Combined, solar PV and wind generation’s share could surge from 7% to 24%.

Solar’s explosive growth is a key change from the IEA’s report from last year (WEO2018), and the agency attributes its optimistic projections to policy changes around the world. It notes China has instituted a partial reversal of a decision to slash subsidies; India is targeting 450 GW of non-hydro renewables-based capacity by 2030; and some renewables portfolio standards in the U.S. have been strengthened. In other notable changes from WEO2018, WEO2019 raises projections for battery storage capacity by nearly 50%, in part due to increases for solar PV. It also raises projections for offshore wind by nearly 80%, factoring in newly announced policies and technology gains. 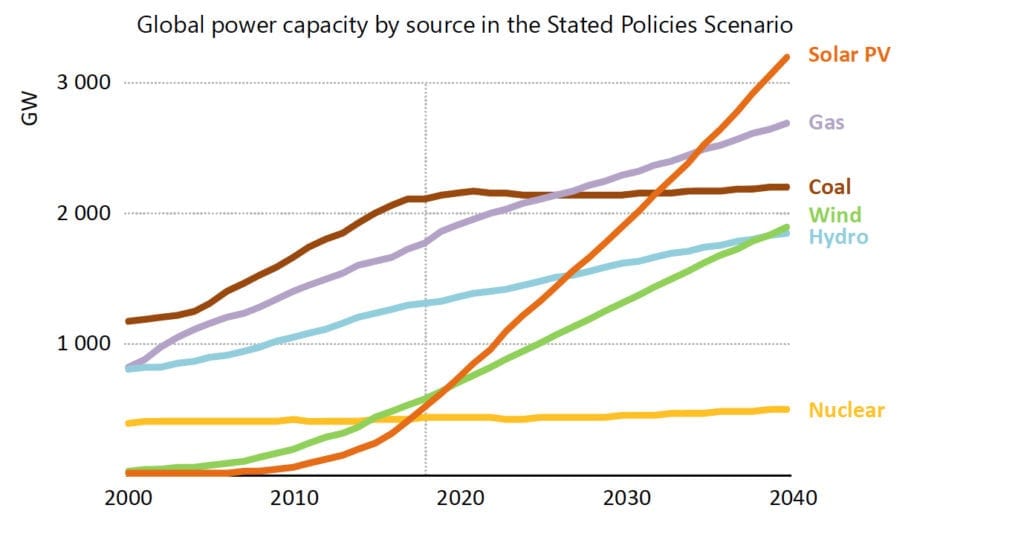 The power mix is being reshaped by the rise of renewables and natural gas. In 2040, renewables account
for nearly half of total electricity generation. Courtesy: IEA

Still, hydropower is slated to remain the largest source of renewable power, holding a generation share of about 15% of total generation in 2040. By 2040, meanwhile, nuclear’s generation share could fall from 10% today to about 8%, “but its output nevertheless rises in absolute terms, with growth in China and more than twenty other countries more than offsetting reductions in advanced economies,” the WEO2019 says.

Fossil-fired generation could fare much worse in the Stated Policies scenario, falling below 50% of total generation in 2040—down from two-thirds, where it has hovered for decades. Coal’s generation share, which grew fivefold between 1970 and 2013, could decline from 38% today to 25% by 2040. “In 2018, final investment decisions of new coal plants were at their lowest level in a century,” the report notes. Without additional efforts to develop carbon capture utilization and storage (CCUS), “coal-fired power remains limited,” it adds.

However, natural gas-fired generation, which has tripled over the past 22 years, is set to surge nearly 50% by 2040, owing largely to the cheap shale gas supply. Yet, it will continue to hold about a fifth of the global generation portfolio by 2040, and its share could decline in Europe and Japan, the IEA suggests. Its role could also change to bolster a growing need for flexibility.

As Tim Gould, IEA head of Division for Energy Supply Outlooks and Investment, explained to POWER, even in a low-carbon scenario, natural gas power’s trajectory will depend on where it is being used. “The starting point for any discussion about natural gas is that prices vary depending on whether you’re close to a place where gas is produced, or whether you are also absorbing the quite significant cost of moving it around the planet,” he said. “But generally, the observation holds that over time, especially as decarbonization proceeds, that the role of gas evolves in the power sector from baseload towards one that is also providing—or even primarily providing—power system flexibility.” 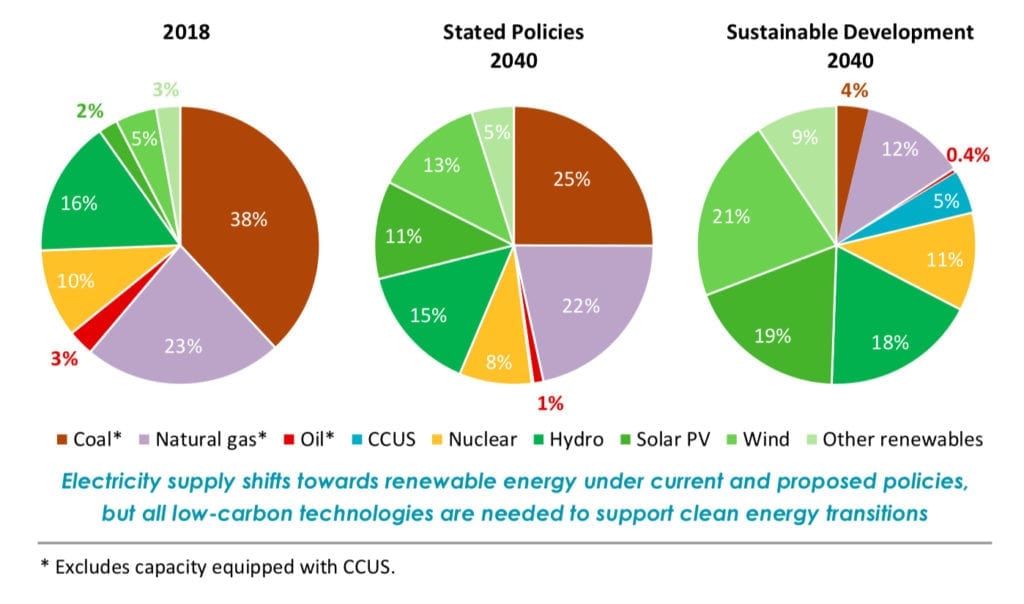 Global electricity generation by scenario (TWh). The IEA’s “Stated Policies” scenario factors in current and already announced policies, whereas the “Sustainable Development” scenario is fully aligned with the Paris Agreement, which has an objective of “holding the increase in the global average temperature to well below 2°C above pre-industrial levels and pursuing efforts to limit the temperature increase to 1.5°C above pre-industrial levels.” Source: IEA, World Energy Outlook, 2019 edition

Power system flexibility a special focus in the WEO2019, and the IEA expects flexibility needs could grow “faster than electricity demand” in the Stated Policies scenario through 2040, owing to rising shares of variable renewables and growing demand for cooling and electric vehicles. “Power plants and networks remain the bedrock of power system flexibility, and demand-side response has huge potential,” it says. To bolster the need for flexibility, the agency forecasts that battery storage capacity will rise 40-fold by 2040, its uptake driven by falling costs, short construction periods, and widespread availability and scalability. In India, for example, cheap batteries could offer such a cost-effective flexibility option, it could eliminate the need for new coal-fired capacity after 2030, it said.

The IEA’s focus on flexibility stems from an exhaustive hour-by-hour analysis of power systems worldwide to gauge how countries were managing power plant acceleration and deceleration, as Laura Cozzi, IEA chief energy modeller, told reporters in a call on Tuesday. “Most of the time [now], all countries manage this acceleration and deceleration. Fast forward to 2040, with the large scale [additions of new renewables], it’s not a surprise that our electricity system will need to accommodate ramp up and ramp down, accelerate up, accelerate down, much more frequently, and to a much wider extent,” she said. “So if electricity demand is growing twice as fast as energy demand, flexibility needs on average will increase twice as fast as electricity demand. In some places, such as India, it’s even four times larger.”

Among the WEO2019’s other key findings are that electricity is one of a few sources that will see rising consumption over the next two decades, though demand could follow two distinct regional paths. In advanced economies, it could rise slightly, owing to increased digitalization and electrification, but it could be offset by energy efficiency improvements. In developing economies, it could be driven by rising incomes, expanding industrial output, and a growing services sector.

Under the Stated Policies scenario, meanwhile, global electricity demand from the transport sector could also surge from 2% today to 10% by 2040, driven by an influx of electric vehicles. In a drastic change compared to last year’s report (WEO2018), the IEA now forecasts 30 million electric cars could flood markets, reflecting policy changes.

As significantly, under currently stated policies, global power sector carbon dioxide emissions could also stabilize at today’s level through 2040, and pollutant emissions could decline owing to wider use of pollutant controls.

US to boost floating wind power

Is the answer to Australia’s high electricity prices blowing in the wind?

Transitions to efficient LED lighting can mitigate the energy crisis