China has committed to a CO2 emissions peak before 2030 and carbon neutrality before 2060. Its 14th 5-year plan will be released in March, followed by sector-oriented plans. For the first time, it will include a dedicated plan addressing climate change.

China’s energy is dominated by coal (58% of primary energy use in 2019), followed by oil (19%). Notably, natural gas’s share has risen from 4% in 2010 to 8%. IRENA’s assessment concludes China must reduce annual industrial emissions by one-third (= 1.5Gt CO2) by 2050. To do that means accelerating renewable power generation and electrification. It means focussing on renewable gases (green hydrogen), biofuels, hydrogen-based synfuels for specific sectors, renewables-based ammonia and methanol, and CCS deployment. China should enable competitive markets that integrate the new technologies, operational practices and business models. We’ll find out to what extent China steers towards such a pathway in March. Its global dominance of a wide range of industrial production means success in decarbonising this sector has consequences for all of us.

China’s President Xi Jinping announced on 22 September 2020 at the General Debate of the 75th Session of the United Nations (UN) General Assembly that China will aim to have carbon dioxide (CO2) emissions peak before 2030 and achieve carbon neutrality before 2060. Less than three months later at the UN Climate Summit, President Xi set a 2030 target for solar PV and wind to total 1,200GW and for the share of non-fossil fuels in the primary energy mix to increase to 25% by 2030, replacing the previous 20% target, as part of the Chinese new NDC commitments.

These announcements have huge implications for China and the world. To deliver that ambition, China needs to define clear strategic goals for many sectors of the economy and must develop long-term energy plans to provide the overarching framework for guiding policy making in China’s upcoming and future five-year plans.

Have you read?
Meeting the Paris Agreement targets: The role of EVs
IRENA: No successful global energy transition without innovation

China is the world’s largest emitter of CO2 emissions responsible for around 28% of global emissions, so its mitigation actions will make a significant contribution to achieving the Paris climate objectives. China’s energy-related CO2 emissions accounted for 10 Gt in 2018, with additional emissions from industrial processes. 7.7 Gt emissions were from coal use, 1.4 Gt from oil, 0.4 Gt from natural gas and 2 Gt from industrial process emissions. China’s per capita emissions (around 7 t/capita/yr), exceed those of Europe.

Total coal consumption including industrial processes has stabilised in recent years at around 4 Gt coal equivalent. The short-term outlook is mixed and will be mainly influenced by demand from both the electricity and industry sectors. Data from the Centre for Research on Energy and Clean Air show that coal demand in China increased by 7% in the metals sector and by 11% in the chemicals sector in 2019 through October and its use to produce cement and glass have also increased.

A transition to renewable power will be the keystone for the energy transition in China, with solar and wind capacity aiming to tripling between 2019 and 2030 – the new target recently set by President Xi. Renewable power deployment however needs to accelerate to both allow replacement of existing coal based generation and to meet growing electricity demand. (A study by State Grid Corporation China and IRENA concludes that electricity can rise to more than half of China’s final energy use by 2050.)

The energy consumption of Industry sectors accounts for 60% of gross final energy use (for both energy and non-energy use), with a proportional share of emissions. However, the emissions reduction in the industry sector has received very little policy attention to date.

In 2019, China’s industrial and construction sectors’ output (measured on a value-added basis) grew by about 5.7%. Within industry, output of non-metallic mineral product manufacturing (mostly cement) grew by 8.9%, while iron and steel output grew by 9.9%. By mass, cement production increased by 6.8% year-on-year, returning to 2017 levels after an 8.4% drop in 2018. Similarly, steel production increased 7.3% year-on-year. As a result of this increased industrial activity, non-combustion process-related CO2 emissions increased by 5.6%. In 2020 the government stimulus package has further boosted the output of these sectors and the related CO2 emissions, which creates additional challenges for the fulfilment of the climate pledges. 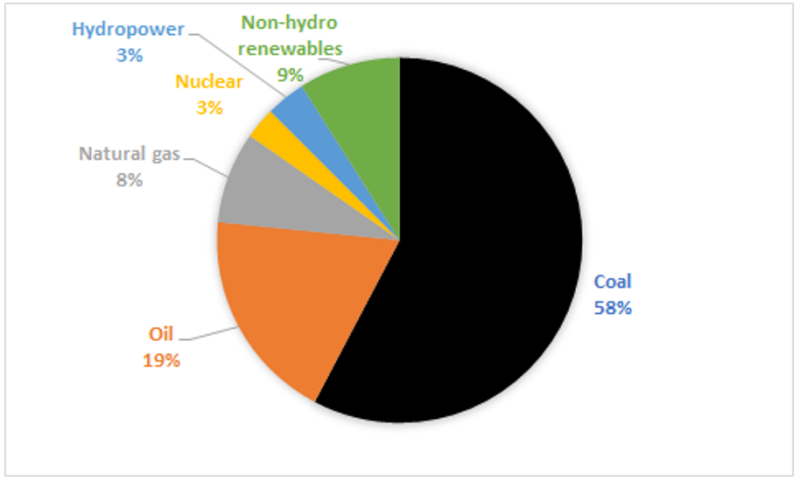 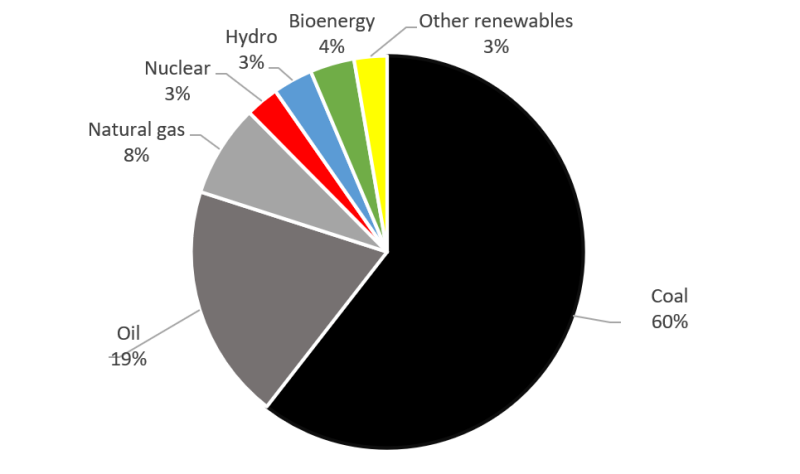 China is the world’s largest producer of a range of energy intensive commodities including:

China’s energy intensive industries are important therefore not just for China’s energy use but is also of key importance for global decarbonisation. It’s the combination of significant volumes and the coal intensity of production that makes China’s actions critical for the success of a global industrial energy transformation. 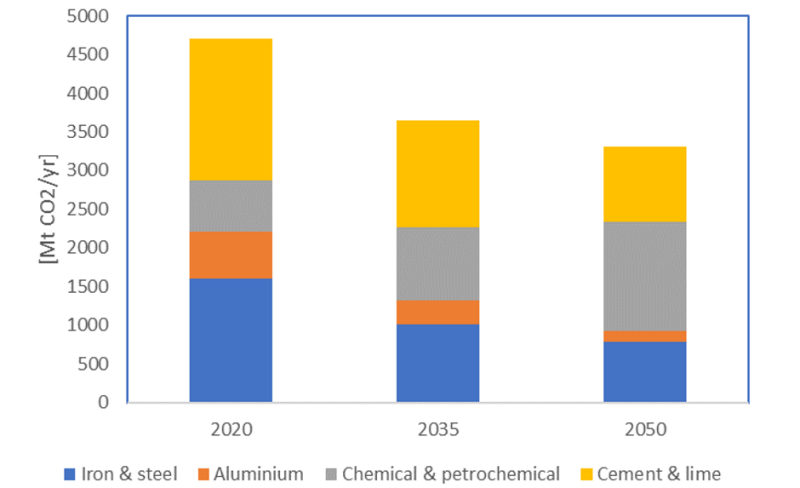 Looking ahead, the immediate-term pathway industrial production will follow in China is not currently clear, despite the long-term vision of transforming the industrial sector to high-tech less energy-intensive industries that will be powered by low-carbon energy sources. Most analyses suggest that metals and cement production will decline while petrochemical production will increase. Such a development would be in line with a general shift of economic activity towards the service sector. The key question however is how fast this transition will occur.

IRENA analysis of a global pathway consistent with the Paris agreement’s below-2-degrees goal suggests for the period from 2020 to 2050 a reduction from around 4.5 Gt to 3 Gt of CO2 emissions per annum in China for the industrial sectors discussed above. That assessment assumes a halving of the carbon intensity of electricity. The emissions from the chemical and petrochemical sectors would more than double while the other industry sectors combined would halve their emissions (figure 3, above).

The effect is significant but not enough to fully decarbonise the economy by 2060. Therefore, additional measures will be needed that include actions to:

The next 5-year plan will be historic

China has a long tradition of five-year plans, and the 14th five-year plan will be released in March 2021, followed by the sector-oriented plans.

This year, China will launch a dedicated five-year plan on addressing climate change – the first time in history – in addition to the 14th five-year plan on energy. This 14th five-year plan is special, due to the issuance of a 15-year mid-term plan that was also approved last year. The long-term perspective to mid-century is still not clear at this moment but is evolving with further studies; a plan for the energy transition between now and 2060 for China is needed.

In a climate context, countries are requested to develop long-term, low-emission and development paths for 2050 in the context of the UNFCCC Paris Agreement. Those climate and energy plans need to be aligned with each other. And national plans need to coordinate with province and city level transition plans in order to assure consistency and to assure a balanced socio-economic development which is essential for widespread acceptance. IRENA continues to work with the Chinese government to explore and develop long-term pathways for deep decarbonisation within the country.

The 4th International Forum on Energy Transition expected to be held in 2021 in Shuzhou, co-hosted by the Chinese National Energy Administration, IRENA and the Government of Jiangzhou province will be a key opportunity to showcase the building blocks of China’s long term energy transition towards a carbon-neutral 2060.

Dolf Gielen is the Director of the Innovation and Technology Center in Bonn, IRENA

IEEFA Update: G7 coal finance exit and why it matters for India

US ethanol exports rebound on near-record shipments to China